I read the book Brandon Bays wrote; The Journey. She tells about how she had a tumor the size of a basketball inside her stomach and how she got rid of it by releasing trapped emotions. Now she created a visualization about how she did it, called The Journey (because you go on a journey inside your own body and look for the trapped emotions by traveling to the organs they are stuck in). My mom guided me through the visualization, where she told me to get in a spaceship with someone who would accompany me. So Tamar and I went into the spaceship and entered my body. We went to the tumor and saw that there were a few dark places (they kind of looked like charcoal from far away). So we went to those places and asked them all what they needed. After a while, there were no dark places left, so we flew away in our spaceship.

One of the dark places had a lot of anger, so we started doing the emotional part of the journey, in which you see what is under each emotion until you reach the source of the emotion (almost everyone reacts angry/sad/scared at a situation that makes them think about the stuff that happened in the past that created the emotion. Most of the time, there are emotions behind the reaction that go back in the past). When we reached the source, there was a very simple, welcoming feeling. I was laying in the grass and saw a tree, which reminded me of a tree from a book I read when I was younger; ‘De verjaardag van de eekhoorn’ (The squirrel’s birthday 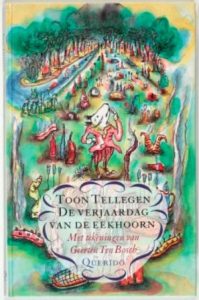 ) by Toon Tellegen. I suddenly realized how much I wanted to feel the warmth of people just being together without all the drama (for example; when you have a spontaneous barbeque with a few people, it’s way better than planning to celebrate new year’s eve with each other. The difference between these two is probably that there are no expectations, no stories and no worries about if it’s fun enough). The book reminds me of how much bullshit it actually is that people judge each other about how they act or look, because when you are together, the only thing that’s important is that you feel good about being together.

Maybe I should tell something about the book, so it will become a little more clear: on his birthday, the squirrel invites all his friends; the whale, the butterfly, the ant, the groundhog, etc. He sends them invitations by letting them taken away and brought by the animals by the wind, water and ground. All the animals respond, by sending a letter back and some by just screaming ‘YES!’ (because they can’t write). The squirrel bakes a pie for every animal; the bear gets a honey pie, the swan gets a floating pie, the groundhog a pie that’s so heavy that it goes into the ground so can eat it under the ground, etc. The animals pick their best outfit and make a special gift for the squirrel. On the day of the party, everyone arrives looking really good. They eat pie and dance. The elephant dances with the giraffe, the humble bee with the fly, the squirrel with the ant, etc. In the meantime, three birds sing and tap a beat in the tree. 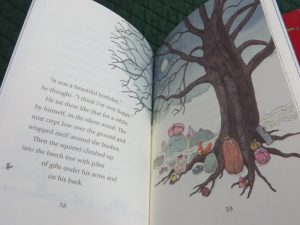 When the dancing is finished, the animals go home with a warm feeling in their stomach.