So many people are leaving…!

One time the Dalai Lama was asked what he found most surprising about humanity. This is what he said: -Man. Because he sacrifices his health in order to make money. Then he sacrifices money to recuperate his health. And then he is so anxious about the future that he does not enjoy the present; the result being that he does not live in the present or the future; he lives as if he is never going to die, then he dies having never really lived.’’ (from: Be Happier Than The Dalai Lama) 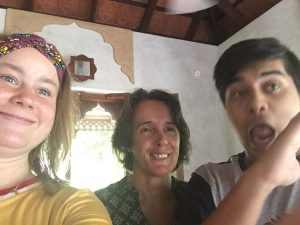 A lot of people left the last two days, and because there are no new people coming, it gets more and more quiet here. Ved, a guy from India who was here with his mom and aunt, was always talking to everyone at the table when we were eating. But they left yesterday, so now people are mostly talking about how they slept and how they are doing and not having very much conversations. At first it was weird that is was so quiet, but at one point I noticed that it’s actually really calm and really nice to not always talk. It helps me a lot with staying in the present moment and it actually also helps me by eating less, because I was busy with a lot of things and not really focusing on the food (the doctor told me to eat less, so it’s better to eat more slowly).

So Ved left yesterday, and because he told me to draw a gecko (because one pooped on my head a few days ago), I gave him the drawing when he left. Ulisse also went home, which I’m kind of jealous of, because he lives in Italy (because of the food of course). But I will go there in a while ;).

Between the 27th and 28th of July, the moon eclipse happened, which was really special because it was also the biggest moon of the year. So at first I really wanted to watch, but Ulisse told me that it was good to meditate when it happened. Of course, I didn’t know anything about it, so I was like ‘oh okay if it’s better, I will do that.’. At 9 pm a guy who also stayed here (he left an hour ago) came to the reception and told us that we shouldn’t go outside between 10 and 11 pm, because of the bad energy. Again, I didn’t know anything about it, so I went to him and Ulisse to ask about it and they told me that the animals all get quiet because they sense something that isn’t right. But I got mostly a little scared because of the words ‘bad energy’, because it made me think about witchcraft and stuff you see in horror movies. So I just went to bed and I did some meditation, like Ulisse said. But I fell asleep before the eclipse even happened and I woke up two hours later :’). When I woke up, I suddenly had to laugh because I realized the guy said ‘bad energy’, and I thought something really scary was going to happen (even though I still didn’t know how it worked, I did see then how stupid it sounded).

I just got the list of things I can and can’t eat for the next weeks. Until now, it kept going wrong with the food and I often got things I couldn’t eat according to the diet that fits the treatments (yesterday, I got soup with a little salt in it and I was really surprised by how salty it was. I’m used to having no salt in my food). My treatments will start coming Friday, so I will have some time to visit my dad. He stays in another retreat centre close by.

One Reply to “So many people are leaving…!”