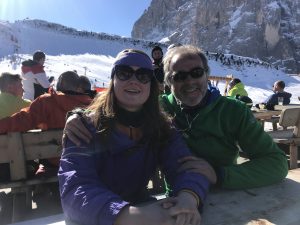 After a week of incredible Italian food and skiing, I feel so grateful for feeling good enough to do those kinds of things. A few weeks ago I switched to another type of chemo, because the other one wasn’t working anymore. Sure, very dramatic happening, but I actually feel the way I look at it is way more important than the stuff that happens. For example, it could be that I get a cold and it’s the most dramatic thing ever, because exactly that week of the cold, I planned my wedding or something. Luckily, I kind of stopped planning big things and started living a little more in the moment. I feel like I can take some more steps with living in the moment, but oh man, I’m taking biiiig steps. I feel more gratefulness for smaller things, when I look less far into the future. Right now, I’m honestly having a little bit of a hard time with dropping the control and the side of me that tries to fix the whole situation. Everything comes back at doing nothing, practically just do a lot of meditation. I don’t know if I’ve ever written about this, but dropping the control is a pretty big challenge, especially for Dutch people ;P. But what actually really helps me through really shitty times, is to have the realization that I’m only human and I always do the best I can at that moment. The only one judging me is me (my ego)and I take steps at the time that is right for me. 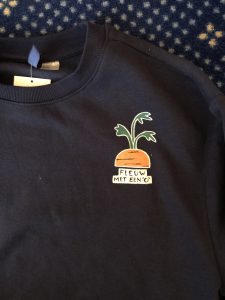 A few weeks ago I took a course with José, called Conscious Therapist where we learned how we can let go of limiting beliefs (that create our reality and sometimes even disease). On the first day (of the three), José gave me a healing in which he showed me what limiting belief was there that caused the tumor. I was so obsessed with finding out why I got cancer and when he told me I was repressing myself as an artist, I was a little bit like ‘uuuh, okay?’. But later that weekend everything fell more and more into place. I’d heard before that he’d ask people with (for example) a tumor of 7 cm, what happened 7 months before (so every month stands for every centimeter). When I got the diagnose, the tumor was 16 cm. After the weekend, I looked back at 16 months before I found out I had cancer and I realized that I had a big project at school that I was working on. We would perform with a band for about three songs and I drew a stop-motion movie. I was feeling so insecure about the whole performance that I created this whole judgmental-kind of situation in my head, even though there was nothing going on. When people get a lymphoma, it represents that they’re repressing themselves. White bloodcells are supposed to fight FOR you, not AGAINST you. It’s like I gave my body the order to fight against me, since I was doing it by creating situations in my head. In this case, I had the limiting belief that I couldn’t express myself as an artist. I’ve come to the realization that someone doesn’t necessarily ‘earn’ the name of an artist, we actually all are (especially kids, since they’re so natural in expressing themselves). We’re just having a little bit of a hard time with letting the natural ‘flow’ of creativity flow through us. Well, it doesn’t really surprise me with all the thinking and controlling we do these days ;P. Of course, an artist can mean a lot of things. I enjoy painting and feel that everything starts flowing when I’m working on a T-shirt (especially when someone doesn’t really tell me any guidelines). But a lot of my friends are incredible on the piano or the guitar and when they’re playing the whole atmosphere in the room changes. When I show people my paintings, I can see that they can feel how much I love doing it. 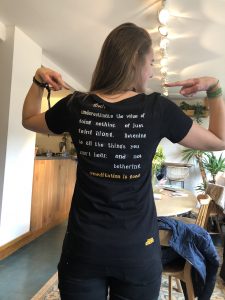 So now it’s a challenge for me to focus on what I enjoy – painting, writing, making pictures, playing guitar – and let the chemo do it’s thing. I know I can’t control it, even though my ego is getting pretty annoyed and mostly scared now.

One Reply to “Being an artist”